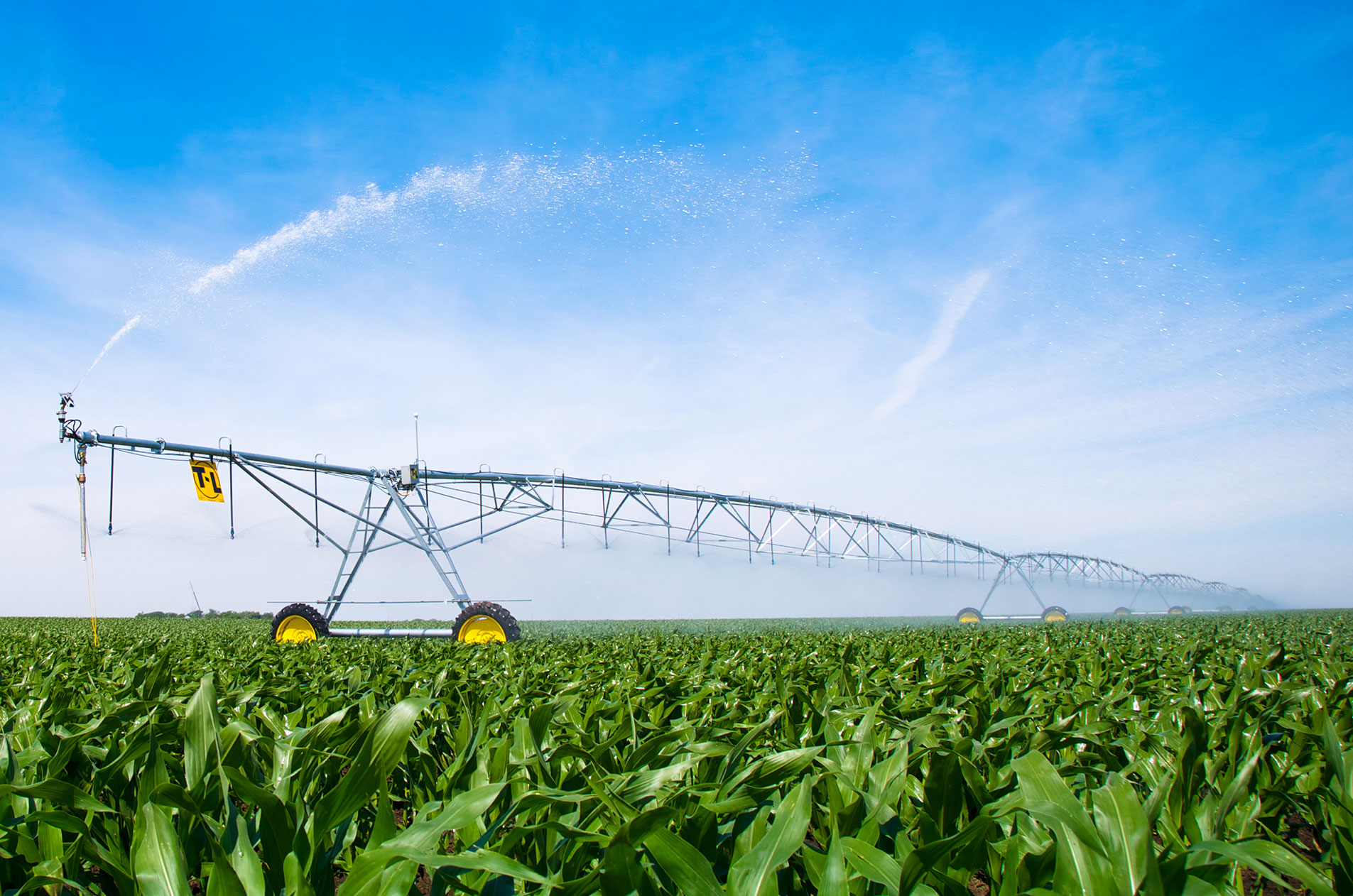 You are here: Home | Testimonials 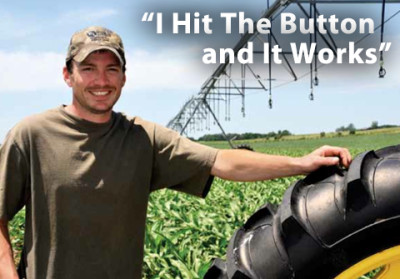 As his dad looks toward retirement, this Nebraska farmer looks to reduced tillage and center pivot irrigation to reduce labor requirements.

Dan Mercer can think of plenty of reasons he prefers pivot irrigation to traditional flood irrigation, including less labor, more even water distribution and the fact that it increases the property value. And he can come up with just as many reasons he prefers T-L units.

Unfortunately, he is running out of places to put them. In fact, the most recent T-L pivot is a quarter circle unit that covers just 45 acres.

“There’s a pasture that cuts into the field, so it didn’t leave much room for a pivot,” he says. “But I think it will still pay off.”

Of the 1,300 acres Mercer farms with his father, Thomas Mercer, all but about 100 acres is irrigated. On the remaining total, eight center pivot units, including seven T-L units, cover approximately 950 acres. The first of those were installed in 1995.

“The last five units we’ve bought have all been T-L models,” he relates. “It’s not that we don’t want any more electric drive units. We just like the way the T-L machines move continuously for nice, even water application.

“They seem to be more reliable, too,” Mercer adds. “Come spring, I hit the button and it works.”

Of course, Mercer says there’s a little loyalty to the community involved, as well. One factor is the location of the T-L factory, which is only about 40 miles away. Another is the fact that one of Dan’s good friends works for T-L.

“I don’t know what it is, but I also don’t seem to have as much trouble with the nozzles clogging up on the T-L units as I do with the other units,” he adds. “I don’t know if it has something to do with the way they build the pipe or what.”

Dan insists the reliability of T-L units is particularly important these days as his dad looks toward retirement, having farmed in the area since 1966. “It’s tough to hire anybody for just the spring and fall,” Dan relates. “If they need a job, they obviously prefer something full time.”

Consequently, Mercer has been trying to get away from as much furrow irrigation as possible … even if the newest T-L only covers a quarter circle.

“We’re down to where we can’t put in any more full-circle pivots,” he explains. “One of the things I do like about the T-L half-circle pivot is that I can adjust the amount of time it sets at the stop before it reverses direction. I usually set it for eight to 10 minutes so we can get the edges watered a little better.”

Mercer says the other challenge to adding more pivots is talking the landlord on their rented land into splitting the cost. Right now, those are the only fields left that don’t have pivots on them.

“The half-swing is on rented land,” he explains. “And on that one, we did a cost share on the pad and the pipe to the base with the agreement that I would have a contract on the rental for a minimum of seven years. In addition, I paid for everything from the pad up, which means I own the pivot. I figure if I ever lose the lease, I can always move or sell the pivot itself.”

In the meantime, Mercer continues to put the emphasis on corn production with a rotation that consists of three years of corn, followed by one year of soybeans. With irrigation, corn typically yields in the range or 170 to 220 bushels per acre, while soybeans average 70 bushels or more.

“I’ve been looking at trying to go with a little more no-till on some fields, just to further protect against erosion,” he says, noting that the transition becomes a lot easier with the elimination of furrows. “But I also look at it as a way to reduce labor, which is really what it’s all about these days.”

His father, Phil, added an eighth T-L unit the following year. Now the family operates 23 T-Ls, plus ten electric units on land they rent. McClymont is in charge of crop growing and his brother Peter handles their 15,000 head capacity beef feedlot.

It was the traditional conventional tillage on their farm until three years ago. Then a big double switch was made to a corn:soybeans rotation and virtual no-till.

During those past three seasons, several of them experienced extreme drought, McClymont’s records show their soybean yields ranged from 61 to 68 bushels an acre. The corn averaged between 197 to 207 bushels, with one field managed normally and not for any contest, coming in at a whopping 238 bushels an acre.

“We need to be able to consistently raise high yielding crops,” McClymont points out. “Irrigation, center pivot irrigation in particular, allows us to do just that.”

Achieving this has been one of the three objectives on which he’s focused. The other two are controlling expenses and marketing.

Realizing early on the value of an annual maintenance program, McClymont says that every winter he and his men spend three to four hours with each of their T-Ls. This routine includes checking the oil, gearboxes, and tires, changing hydraulic filters, and greasing the pivot point.

His records show total average outlay for this work on the T-Ls to be less than one-sixth the average maintenance bill for an electric unit.

Then, during the summer, while it’s a rarity for him to request a service call for one of the T-Ls, “Each of our electric machines will average between three to four service calls during the season. Ninety percent of the time it’s a switch, a lot probably due to the constant starting and stopping each tower does,” McClymont says.

“So, that’s usually a half-day of sprinkling lost, although we had one unit last summer that took two days to fix. We have two electrics that chronically seem to blow fuses with every thunderstorm.”

With their T-Ls, though, they typically experience few if any problems other than a tower getting stuck on occasion, and that’s not peculiar to T-Ls alone, according to McClymont.

However, in contrast to the electrics, he notes that their employees can do 100 percent of any necessary work on the hydro static T-Ls. That’s not the case at all with an electric center pivot.

McClymont recalls a bad experience with electricity at a young age, and he just doesn’t like working around it. Neither do their employees. He also thinks that if they attempted to do much of the electrical repair work themselves, from a safety standpoint two men should work together in case of an accident. This, however, would add to expenses.

“We see a lot of neighbors routinely replacing their 20-year-old electric center pivots,” McClymont smiles. “Meanwhile, our 27-year-old T-Ls are as structurally sound as the day they were put up, and still run straight as a string. All we’ve done over the years is replace some nozzles and tires and change the sprinkler package.

“We believe that with proper maintenance our T-Ls will run until they’re 50 years old,” says McClymont.

Incidentally, McClymont thinks it’s possible that T-L center pivots might provide at least a small yield advantage due to their continual motion. This results in fertilizer applied through the system being more evenly distributed to all the plants in a field.

He comments that he’s also “been really impressed” with many of the new features made available on T-Ls in the past several years.

High on his list is the ability to control center pivot speed and direction from the well location. This is especially important on the fields they’re converting from gravity to sprinkler where the well is at a different location from the pivot point.

Also appreciated, he says, is the flexibility and wide variety of sprinkler options T-L Irrigation makes available. There’s a sprinkler package that can fit almost any soil and slope situation.

“We like the way they’re made, the quality of the equipment, the lack of repair work needed, and their longevity” McClymont sums up. “We think the T-L is a much better value than an electric.”

Now 70 percent center-pivot irrigated, the McClymonts are switching their remaining gravity irrigated 30 percent over to center pivots as quickly as they can. There are many reasons for this, with increased net profi t certainly the most important.

“I did a comparison last winter of what it cost us to pump water in 2002,” McClymont reports. “We had $18.52 less energy expense per acre under our center pivots than we did under gravity irrigation!”

“And,” he quickly adds, “that figure doesn’t consider the lower labor and machine costs, and how we usually needed to make fewer trips over a center pivot field. I calculated that there was a nine bushel an acre corn yield difference favoring the center pivots, too.”

Nor does the pumping cost figure reflect being able to put on water any time McClymont wants to improve a stand or water down a herbicide for enhanced weed control. Their pivots are also used to apply pesticides and approximately 60 percent of all the fertilizer going on any field.

“Center pivots are just a tremendous tool we can use to solve a lot of the management problems that we may run into during the growing season,” McClymont says.

Projecting into the future, he also notes that, “We’re looking at a time when the amount of water we can pump in a year or three-year average is regulated. Only a center pivot will realistically allow us to manage water usage under that kind of situation.”